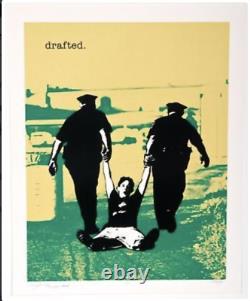 This is a mint condition signed and numbered print entitled Drafted. 2004 Hand printed silkscreen and pencil on acid free archival paper 20 x 16 inches Edition of 200 Numbered 111/200 and signed by the artist.

Upon graduating from Rutgers University with a degree in art history, Dunn moved to Europe to pursue fashion photography. After traveling and shooting extensively for two years, she moved back to New York where she became a successful photographer shooting for magazines such as Spin, Vogue, Elle, Harpers Bazaar and Dazed and Confused.

In the mid 1990s, Dunn began to focus much more on filmmaking, first creating small pieces for herself and eventually shooting and directing some of the most classic films of this generation. Her first film, Sped (1997), was created as a series of vignettes on young artists from the worlds of skateboarding and graffiti.

Produced originally as a promotional film for a snowboard company and for a very small. Audience, the film went on to be featured in film festivals worldwide. Her second film, Backworlds for Words (1999), is a documentation of a skateboard ballet, choreographed by artist/professional skateboarder Mark Gonzales for the Stadtisches Museum in Monchengladbach, Germany. The film includes footage of the actual performance as well as candid interviews and documentation of Gonzales performing poetry readings around Germany. In 2000, her photos were included in the Widely Unknown show at Deitch Projects in New York.