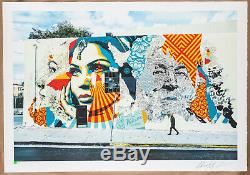 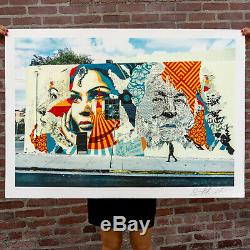 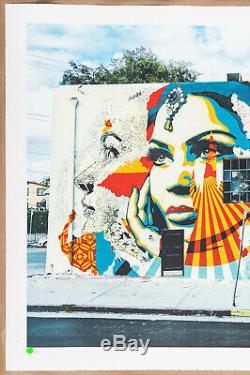 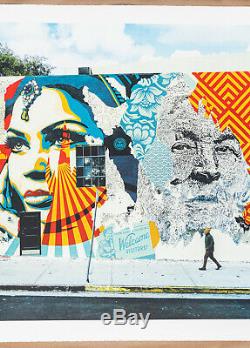 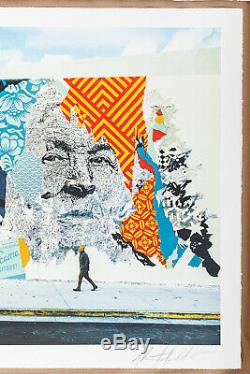 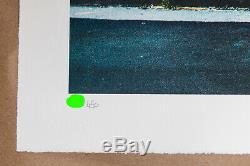 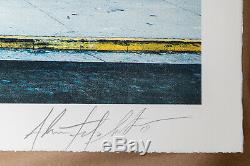 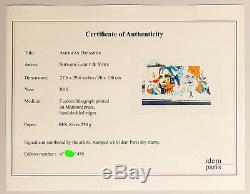 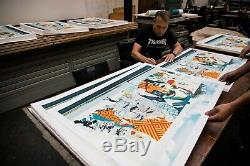 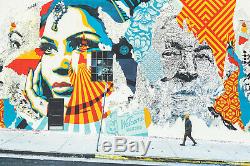 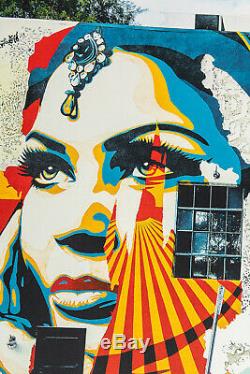 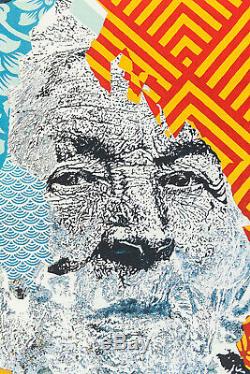 American dreamers is a wall in los angeles of collaborative shepard fairey (obey) with Vhils. They created a lithograph print of this wall at ditto studio historical, fine-art print shop in Paris, Where They use a very special process to print Their lithographs and-have Worked with masters like Matisse, Picasso, Miro, dubuffet, Braque, Chagall , Giacometti, and light ... You can learn more about Their lithography below! Built in 1881 by eugene Dufrenoy printer, the workshop site location is 49 rue de Montparnasse Was created to install dufrenoys lithographic presses. Housing two floors is 15,000 square feet, the 19th century workshop Begun with flat belts driven by machinery operated by propeller shafts and a steam boiler used to That Was Provide energy for the machines. The premises occupied by the later Were michard printing company, Specialized in qui Creating special edition maps filled with vibrant colors.

Finally, the workshop fell into the hands of Fernand Mourlot in 1976 and has est devenu fine art print shop. The brother duo and craftsmen Were Reviews part of the revival of lithography and Began working with étroitement Artists Such As Pablo Picasso, matisse, alberto Giacometti, Joan miró, Marc Chagall and Many other artists of the 20th century. Today the printshop is dedicated to contemporary artists Such As Sophie Calle, Jr, William Kentridge, david lynch, paul mccarthy gold Raymond Pettibon.

The density of ink is very generous and Gives an exceptional result. The company is now Mourlot Known by icts current name, ditto, and stands as one of the oldest printing houses and one of the only That still uses the traditional technology of lithography. Vhils and i just completed a collaborative mural titled american dreamers we Mack Sennett Studios in Silver Lake, Los Angeles!

My target exceptions image in the center of the wall, addresses the challenges of Both visiting and Becoming a resident of the united states, for Many People. As it turns out, there are various target criteria That Make a person an ideal candidate to immigrate, purpose MOST people Who might long to Fulfill the American dream are exceptions to the target qualifications, Especially Considering the attitudes and Attempted policies of the current administration. Resident status in the united states is Hypothetically Granted for hand Four Reasons: family ties, employment, status as a refugee, and to Promote Diversity. In other words, it will be Most Likely family or business / employment Connections That Are The MOST viable route to a u. Vhils liked the style and feeling of my picture and added textures and His Own chiseled portraits with women of different ages to symbolize the multi-generational kind of the Struggles of immigrants. The item \The seller is \This item can be shipped to the following countries: america, europe, asia, australia.
banksyjeansparislithographyposterlithographsignedpaulincludedbernardabstractprinteditioninvaderabstractionartsrarepencilsignhenrinumberedartistobeyhansoriginalbuffetjeanverystonehandhandsignedcrayonframelithojonone