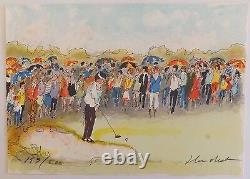 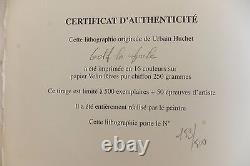 Original Lithograph signed and numbered 153/500. Has been printed in 16 colors on vellum paper pure cloth banks 250 grams. Lithography accompanied by his certificate of authenticity made by the painter. Born in 1930 in reindeer, is a contemporary French painter. After studying law and passing through the textile industry, in 1960 he devoted himself completely to painting which he already practised as an amateur.

A self-taught painter, he settled for 3 years at bridge-aven, where he painted many landscapes and typical characters of this particularly exciting region. He moved to Paris in 1963. The sudden change of scenery and the taste of travel so important among Bretons, will encourage him to travel through Europe and the Middle East, but it is above all Latin America that will attract him and allow him to make a large number of works, both in Indian markets and in the face of grandiose decorations. 14 journeys of more than four months each from the mexico to the brasil through the peru, the central america and the Caribbean, will allow him to write in addition to the painting, a book on these endearing lands, followed a few years later by a luxury book on the Egypt. In addition to several stays in new york and the new Orleans, Huchet will make exhibitions in Egypt and in south-east Asia, but it is in paris above all that he will carry out the largest number of works making, about 300 editions of lithography that he himself creates on the presses of various Parisian workshops and on the coast of Azur.

Its Breton nature and its attachment to the sea and the boats will inspire it in the realization of numerous lithographs and marine canvases, which complete its work also focusing mainly on Latin America, bets, provence and its native bretagne. His talent earned him the favors of many collectors around the world. This item is in the category "art, antiques\art of xxe, contemporary\prints, engravings". The seller is "galeriesartonicerveau" and is located in this country: fr.

This item can be shipped to the following countries: america, europe, asia, australia.