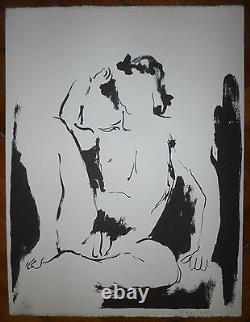 Original Lithograph signed at the bottom right numbered on 50 ex format 65 x 50 cm. Printed on perfect arch vellum condition. Robert-louis nicoidski, born in lime-de-fonds. December 5, 1931 and died in Paris. On October 23, 1996, he was a painter.

Robert nicoidski, a child of a solitary temperament whose artistic vocation appeared very early, began to paint at the age of sixteen. He's a schwob lucian student. In the lime-de-fonds from 1950 to 1952, then entered the school of the fine arts of genève. Being independent and rebellious (recognized very good cartoonist but already creating his own painting instead of the incontrovertible copy of the art classics), the conflicting relationship with his master of painting made him exclude it in 1955.

Arriving in Paris in 1956 he will live at 11, boulevard de clichy. , robert nicoidski attends the National Higher School of Fine Arts. From 1957 to 1960, working successively in the etching workshops of Edward Goerg. Of which he can only notice.

"the painful caricatural in his naked and the treatment without complacency of the theme of voluptuousness". "he mixes sympathy for archaism and curiosity for contemporary expressions." Bersier will also set out a master-pupil relationship that was good or even accomplice, evoking nicoidski in his little story of the original lithography in france.

The reborn galerist bréheret discovers it then and is the first to expose robert nicoidski to bets. Who discovered it in turn and exhibited it, for the first time in 1962, regularly thereafter, in his gallery the contemporaries. Despite his immediate success in the U. Market, the artist, refusing any financial ease bait thus offered, wants to remain rigorously vigilant not to. From repetition and bound for this, with his wife clarisque and their son, to a discipline of life recluses all devoted to pictorial research for him, to writing for her, to a solitude which will remain consented until 1975.

This is the time when it slides from lyrical abstraction. To the composition of the nudes, where. "he distorts and tortures the body to make it a landscape, a monster, a martyr, where he paints portraits of the people that are murdered and of those who are with them." Announcing his series of abortions, mother and child, decorporations, 33 crucifixions.

The most fulgurant encounter of robert nicoidski remained in 1975 that of Lyons roger kowalski. Of which he immediately becomes the friend, the latter welcoming him for the clinging to the candles of his gallery k. At lyon, of the series of abortion canvases. Roger kowalski, only 41 years old, will die a few weeks after this exhibition and robert nicoîdski will paint several important portraits, tributes to the poet-galerist, entitled portraits of k.

If the relations between robert nicoidski and the sulfurous fernand legros. They are not historically reconstructed, they are attested by a series of scenes and portraits painted by nicoidski, one of these paintings illustrating the cover of the book of fernand legros (false stories of a false artist, albin michel, 1979). The Nichido Prize, which was awarded to robert nicoidski in 1976, has a personal travelling exhibition in the great Japanese cities, and therefore, for our artist, a trip to Japan where a major fascination is revealed for the show of sumo. He discovers a notion of aesthetics that reinforces his own, where what constitutes according to Western norms.

" Transfigures, in his eyes, into a representation of the. "On canvases, where we see these naked warriors painfully interlacing themselves, destined from an early age for early death, carry in them this disturbing mixture of mildness and violence suggested by the powerful fragility of forms." Leaving this world - also too early - on December 23, 1996, two months day after the death of robert, the final text of writer of clarisse nicoidski was the biography of her husband which she gave to the Museum of Fine Arts of Chartres for the retrospective tribute robert nicoidski which opened in January 1997 and to which she was promised to attend.

He questioned all aspects of the line without giving himself artificial boundaries between what falls within the abstract. And what comes under the figurative. Curious to the extreme of all the resources that a plasticist can offer materials, he will be one of the first to use acrylic paint in his association with other types of paint. He is also one of the first to use plastic resins to make them stained glass windows.

Furniture paintings, national centre of art and culture georges-pompidou. From bonnard to baselitz, ten years of enrichments of the firm of prints, national library of france, 1992. "a wild eroticism emanates from the nudes of nicoidski. Attitudes, distortions, of course, reflect this.

We can find him still obsessing in the long and heavy hairs that veil the braids or limbs, whose weight causes the chaffs to smear, in the negritudes. Also whose epidermis has a bronze patina. Nothing is further from obscenity than this eroticism. This remains engraved and tense in its most direct manifestations. "This painting calls into question what we have more secure and at the same time more fragile: our physical domain.

The nicoidski paint is the most serious and direct paint that can be found. But there is reason to wonder about his mental extensions which are infinite...

"with obstinacy, nicoidski probes the secrets of the body, from the mystery of his birth to the alchemy of his evolutions, from the dazzling of his creation to the battles which he will never cease to lead. To the explosions of life and senses of the first series of drawings answer the great female nudes to the bodies torn by violent distortions.

Here, the effervescence of the route leaves no room for violence in the treatment of these tortured, arched bodies, enclosed in architectures that seem to leave no way out. Inexorably alone in his body, the being is forever assailed by the mutations that lead him to his future. "It looks like the creator composing the equation that would allow the living. We're at the heart of the cytoplasm that's going to give birth to the bodies. Nicodski gives us the signs and forms of his adn that will give rise to his models.

"He painted a series of abortions depicting monstrous and bloody fetuses. Feminins are hypertrophied, indicating its power of deformation and recomposition, and its taste for blood, giving its compositions an almost anxious strangeness. "Nicoidski is a madman of painting, his works proclaim a passionate love for an art that is as essential to him as breathing... From the generation of rancillacs.

Close to the artists of the new figure. His gargantuan nature, his dostoevskien command with a sure hand that makes him an admirable portraitist...

But the artist, who disappeared at 65, did not bear to be ahead of his time, misunderstood, deemed too violent and yet deeply rooted in his time. Modern art museum of the city of betting. From the National Library of France.

It is in the category "art, antiques\art of xxe, contemporary\prints, engravings". The seller is "clickgraphic" and is located at/in bets. This item can be delivered anywhere in the world.