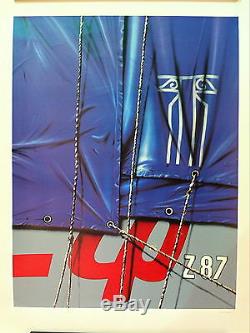 Signed lower right numbered printed on vellum size 115 x 74 cm. Peter Klasen was born in Lübeck. German working in the field of industry. In 1962, it is one of the founders of the new figuration. In this movement, which also took the name of narrative figuration.

Find themselves particularly valerio adami. In 1959, he arrived in Paris.

And in 1960, moved into a studio Street clignancourt. From 1955, Peter Klasen began learning lithography techniques and airbrush. He entered the School of Fine Arts Berlin.

It is then davant school guard and benefits from the presence of young teachers trained in the spirit of the Bauhaus. This sort Hann, significant informal school painter. It follows the course of Will Grohmann. His first solo exhibition is held in 1966 in Paris.

In 1981 he is living in New York. In 1985, Peter Klasen landscape in a disused factory in Vincennes it into home-studio. In 1977, Klasen meeting DHELLEMMES Peter Pan, whom he married in 1986. They have two daughters, Sydney and joy.

In the early 1960s Peter Klasen produces canvases painted in acrylic applied with an airbrush. That incorporate collages of objects, photos and documents. In 1964, he participated in the \At the Museum of Modern Art of the City of Paris. In 1968, he began the series of \In 1974, he began a new series inspired by work on confinement and reflection on the Holocaust. It shows on large canvases painted reproductions rear of trucks, cars, grills, chains, marked with numbers, letters and visual codes of caution.

In the 1980s he executed a series of paintings that reproduce photographed graffiti on the Berlin Wall. In 1991, he directed Shock Corridor / dead end, an installation inspired by the film samuel fuller.

That evokes the concentration camps more than psychiatric. In 1997, he appropriates the digital printing techniques to achieve very large sizes that evoke collages on which they use objects, neon. In 2009, he created a device inspired by the machine of the Penal Colony Kafka.