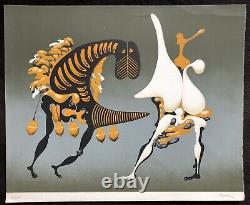 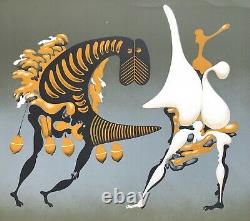 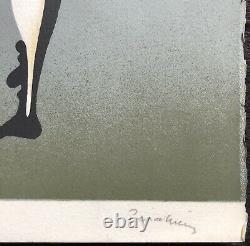 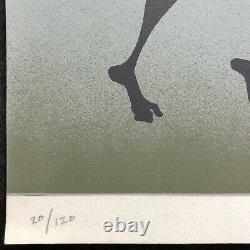 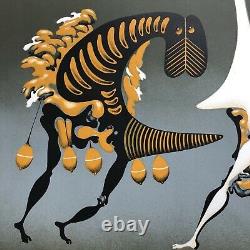 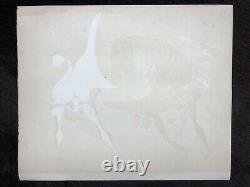 Signed in pencil at the bottom right and numbered with "20/120" pencil at the bottom left. Dimensions: 44 x 54 cm. Jules perahim French painter of Romanian origin, born on 24 May 1914 in bucarest, died in Paris on 2 March 2008. He is considered - with victor brauner - as the representative of surrealism in the painting in Romanian, but he also painted official images (including portraits of leaders) in the style of "social realism", dominant in the eastern bloc from 1947 to 1990.

Born under the name of jules blumenfeld in a family of Bucarest Jewish intellectuals, the artist became known as perahim as early as 1930 (as blumen, perahim means "flowers"). First of all he raised painters nicolae vermont and costin petrescu, teachers at the school of fine arts of bucarest, he departed from their teaching and became, as early as 1930, one of the prominent figures of Romanian artistic lavant-garde. In 1930 he published with young poets (including ghérasim luca) the non-conformist magazine Alge, which appeared in different formats between 1930 and 1933, and which earned them a few weeks in prison for infringing morals. In 1932, he exposed canvases to bucarest that were considered to belong to the surrealism dream of a young girl, a cypress crosses the sea, perfect balance, etc.

In 1936, the exhibition of paintings and drawings opened in bucarest was imposed by the violence of images which, in a fantastic vision, rose up against the rise of the repressive agents of thought profiles of a moral, step-father's game, etc. And the functioning of the power established board of directors, lumpenproletariat and aristocracy, labour, etc. In 1938, in prague, perahim exhibited in the home of the innovative theatre of a. Burian (frequented by artists and writers of the Czech avant-garde); he met the German Dadaist artist john heartfield, known for his anti-Nazi photomontages.

Without being able to go to bets, where victor brauner and gherasim luca were already present, he is forced to return in romania in the midst of the ascent of the extreme right violently anti-Semitic. Threatened and pursued by the iron guard, both for his opinions on the left and for the corrosive drawings published in the democratic press cuvantul liber, reporter, etc. At the end of 1940 he took refuge in Bessarabia (Moldavia) and became a Soviet republic. In June 1941, after the attack by the German army, he fled with the civilian population, submitted to compulsory work and carried out occupations of workers' fortune, peasant in a kolkhoze, etc. He walks through the caucase and arrives in an armed state where he earns his living by creating sets and costumes for a theatre reserved for the wounded of war in kenaker, near erevan. Mobilized in March 1944 in Moscow to become illustrator and graphic presenter of the magazine of the Romanian antifascists "graiul nou", perahim returned to romania as it declared war on the axis. During the Stalinist period, during the fifties, perahim produced impersonal images in accordance with the imperatives of a directed art. He renounces personal painting in order to undergo the food subsidization to imposed themes; nevertheless, he actively engages in the development of an "art for the forum": wall decorations in mosaic house of culture in mangalia in Romanian, etc. Proverbs and sayings in 1957), illustrations of books for Romanian and universal literature. Only the creation of theatre decorations (vladimir maiakovski the bath, 1957; stone ball the hammer without master, 1958) and the creation of ceramic shapes and decorations (exhibition to bucarest in 1965) allow him, during these years, a return to expressive research, far from "social realism". His art is recognized in his country (state prize, honorary title of master emeritus of art) and in international circles (gold medal of the leipzig book fair, silver medal at the triennium of milan, winner of the international festival of epidaurous theatre in Greece, honorary member of the Academy of Florentine Drawing). Between 1948 and 1956 he worked as a professor of graphic arts and scenography at the Bucarest Institute of Plastic Arts and was editor-in-chief of the magazine "arta plastica" from 1956 to 1964.

From that date on, perahim began painting again and used exercises to "force inspiration" (max ernst): decals, rubbings, collages, etc. Presentations in part to bets in 1968. In 1969 he settled permanently in betting. Since then, his work has been the subject of some forty personal exhibitions in france galeries a. In addition, perahim has been exhibited on numerous occasions in the framework of collective exhibitions of prestige museum of fun organized by asahi shinbun, tokyo 1984; art and alchemy, biennial of Venise 1986; surrealism and love, museum of modern art of the city of Paris 1998; marcel duchamp e altri iconoclasti anche, museum of modern art of Roma 1998; hypnos.

Contribution to a visual history of the unconscious, modern art museum of lille metropolis 2009, etc. And in international fairs, buffalo, bologna, gand, betting fiac, etc. Beginning in the 1990s, he was again presented in romania in exhibitions dedicated to the avant-garde. During these forty years of life in France, the artist's painting and drawings present a world of enchantment. Travels in southern Africa leave deep traces in his creation, marked by an intense vitality resulting from "universal communication, a hybridization of all forms of life in a generous sensuality that commands and directs the symbiosis of all elements" (as edouard wrote in the perahim album published in 1990).

The world of perahim remains open to all combinatorial fantasies: a fabulous bestiary bringing together the animal and the plant, the mechanics and the living; great-scale illusionist landscapes traversed by surprising and incantatory forms. His work is found in numerous public collections: national betting contemporary art fonds, museum of contemporary art of rome, museum of art of jérusalem, national museum of art of bucarest, but also in many private collections swarmed around the world. Perahim is affiliated with the adagp (société des auteurs dans les arts graphiques et plastiques). His wife, marina vanci-perahim, art historian, professor emeritus at the university paris i pantheon-sorbonne, holds the moral, intellectual and heritage rights of the artist. He was buried in the cemetery of the father-lachaise (7th division).

The item "perahim jules lithograph original signed Romanian surrealism victor brauner" has been on sale since Friday, May 14, 2021. It is in the category "art, antiques\art of xxe, contemporary\prints, engravings".

The seller is "batou91" and is located at/in bets. This item can be delivered anywhere in the world.