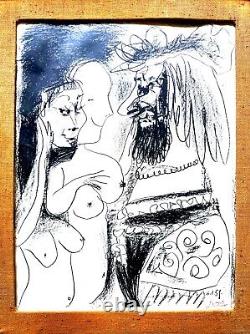 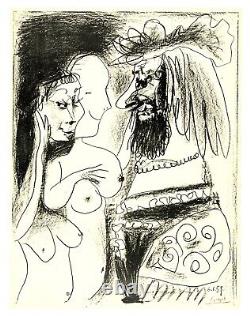 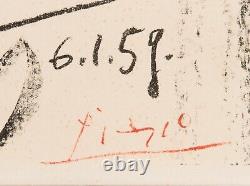 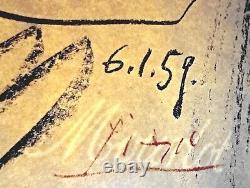 Original lithograph signed in stone on vellum arch paper, dated and signed in stone at the bottom right. Moorish watermark under the signature. Watermark of arches in the lower left corner. Dimensions: 67 x 51.3 cm. Condition: in very good condition.

Referenced in blockh 896; murlot 317; güse-rau 682. The old king lithograph signed in stone by pablo picasso, original lithography in black ink on white arch paper. Signed in stone, in red at the bottom right in the image. Executed in lithography by transfer in 1959 with canes.

Entitled "the old king", the image shows the old king looking at two young girls. Many art critics see in this fantasy image a kind of picasso self-portrait itself. Dated June 1, 1959 in the plank, this work was published by a Niçois communist newspaper, the patriot.

The plate was detruct after printing, while no further printing could be made a posteriori. Feel free to make an offer! The Old King, 1959 / the old king, 1959.

Original lithograph on velin d'arches paper, dated and signed on the stone with red at the lower right margin. Mourlot's watermark under the signature. Arches watermark on the bottom left corner. 67 x 51.3 cm / 26.3 x 20.1 in.

Signed in the stone, in red lower right in the image. Executed as a transfer lithograph in 1959 in canes. Titled "the old king" (the old king), the image shows the old king gasing at two young maidens. Many art criticals see this whimsical image as something of a self-portrait of picasso himself. Dated June 1, 1959 in the flat, this work was published by a communist newspaper in nice, called the patriot.

The flat was polished out after printing, so no additional impressions could be sweated after. Rare and hard to find, feel free to make an offer! This item is in the category "art, antiques\art of xxe, contemporary\prints, engravings".

The seller is "paris-art-hub" and is located in this country: fr. This item can be shipped to the following country: whole world.