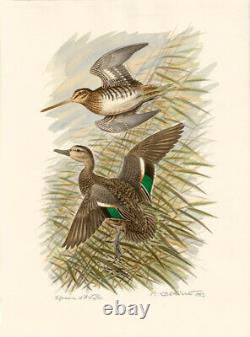 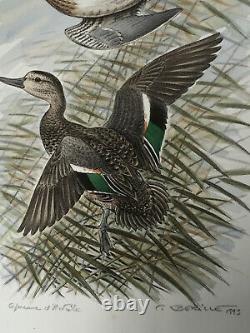 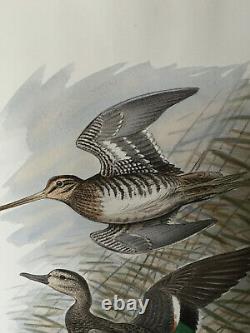 Original lithograph of Francis Berille \Printing on lithographic and watercolor press by the artist. Francis Béille born in 1945 in Paris. As soon as he is passionate about drawing and birds.

Soon his passion for the Lornithology will lame to practice hunting, and he will spend all his moments of leisure in Mont Saint Michel bay to capture and observe the birds, to paint them. Graduated from Lecole Estienne, (National School of Book Techniques), he works in advertising and the indication, and in parallel follows drawing classes in Montparnasse, Place des Vosges and especially frequently frequent naturalness museum, for which he will perform several Dillustration works, and where he will have as teachers, the animal painter r.

In 1969 he exhibited for the first time at the Gien Hunting Museum, and in 1974, for the first time in Paris. In 1976 he was sinstalla with his family in Puisaye, a detangic, wild and gibber region, south of Lyonne. There he will hunt, paint, draw, sculpt the animals that fascinate him, he loves and he will raise to better study them.

Foxes, Wild Cats, Martres, Foots, Badges, Straps, Deer, Ducks, Geese, Falcons ... Were or are still his residents. In addition to a numerous illustration work done for the application and advertising, he collaborated on several cynegétic journals, and realized for the National Journal of Hunting, more than one hundred paintings illustrating each month the double central page. He draws and painted with the same interest, in the oil, to Laquarelle, and realized and published engravings and more than 120 lithographs, drawn on stone, and of which he puts in color in lacarelle, each copy, which diffuse all over the world.

He also published bronzes since 1981, either at the wax lost or sand-melting. The Gien Hunting Museum has many of its works, including a bronze of mille duck acquired thanks to the conservative benevolence Mr. The item \The seller is \This article can be shipped to the following country: France.