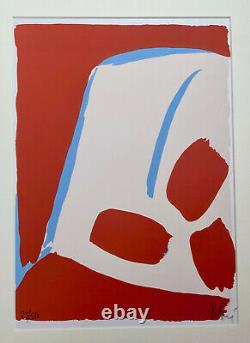 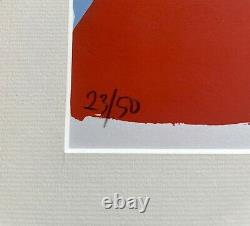 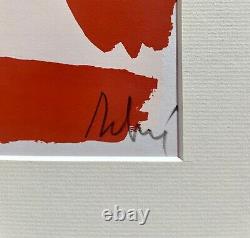 Original Lithograph signed in lower right corner and numbered 23/50. Olivier debré, born on 14 April 1920 in Paris where he died on 1 June 1999, is a French painter, major representative of lyrical labstraction.

After completing the second part of his baccalaureate in philosophy, he enrolled in 1937 for architectural studies at the school of betting fine arts in the workshop of his uncle jacques debat-ponsan, and enrolled in the sorbonne for a bachelor's degree in history which he obtained in 1942. He attends the corbusier's workshop. Around 1950, he favoured the matter and the deaf colors. Olivier debré exposes new york to the gallery perspective.

He is invited to the May show in which he will participate until his death. In 1951 the bookshop-galerie la hune presented for the first time the engravings of debré olive trees. The following year, he took part in his first exhibition in October, which brought together the most significant painters of non-figurative and abstract art.

1953 corresponds to a pivotal period in the debrate olive work that leaves the signs-persons for landscape signs. It was at that time that he became aware of the many possibilities offered by the technique of lithography that he had never ceased to practice.

In 1956, michel warren organized his first individual betting exhibition. The following year, the second exposure in michel warren included it.

"now in high place among the leaders of the school of betting". Written john prossot in apollo. After a trip in Spain, he exhibited in 1959 at the phillips gallery in Washington. In May, the first personal exhibition at the knoedler gallery in the United States. At the turn of the 1960s, he returned to the landscape, his painting was more fluid with punctuations of thick concretions that delineated and created space.

He then describes his painting as a fervent abstraction because it symbolizes the emotion felt in front of the landscape. A great colorist, his intervention on the pictorial space exalts the color. In the 1970s, his painting reached a formal balance in a series of canvases in a square format.

Olivier debré sometimes painted very large canvases by dragging a kind of brush-broom on the canvas on the ground, still painting outside, no matter what the weather. He also designed a postage stamp, stained glass windows, painted several stage curtains, for the French comedy, for the Hong Kong opera and the new shanghai opera. He was also a sculptor and illustrator, among others books by michel deon, francis ponge, edmond jabes and jukien gracq. He has published some artistic essays, in particular to give his vision of the evolution of forms, and proposed a new architecture adapted to the contemporary city.

The item "Olivier debré composition, lithograph signed and numbered, ca. 1970" has been on sale since Monday, July 5, 2021. It is in the category "art, antiques\art of xixe and before prints, engravings, lithos".

The seller is "galeriesartonicerveau" and is located at/in betting. This item can be shipped to the following countries: america, europe, asia, australia.