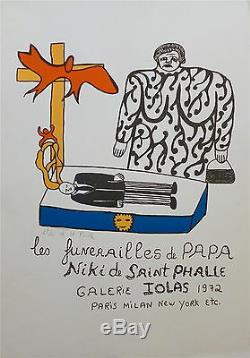 Niki de Saint Phalle was first singer and followed no artistic training, but began painting in 1952. In 1961, she is a member of the New Realists group. She is the wife of the artist jean tinguely.

She worked first as a model for fashion. Encouraged by the painter hugh Weiss.

During which viewers are invited to shoot a rifle on pockets of color and splashing plaster assemblies, make it famous. She then joined the circle of the new realists, playing the role of mediator between the Spanish and American avant-garde. It creates votive offerings, and the girls, buxom women and colored mesh, paper mache and polyester typical of Spanish art. His later works such as the fountain in Paris before Igor stravinski beaubourg, the garden of tarot cards in capalbio.

In Tuscany, or meta tinguely in tribute to her late husband, combine poetry and humor, spirit of the game and anxiety. Aids engaged in the association, it succumbs to a respiratory disease related to toxic fumes inhaled during the preparation of his works based on synthetic resins. In 1994, she published my secret she tells rape by her father 35 years banker met when she was 11 years old.

Date of first exposure, it is famed by performing firing: fixed on a board, colors filled tubes are covered with plaster and are drilled using fire rifle. This new way of painting the projects on the international art scene. This new technique is of the order of performance art.

The piece consists of several elements, first the time of the shooting, which instead of performance, but also the final painting, the paint splattered board as bleeding raw. The shots are also the representation of a materialized violence. Being very tormented by his past, the shots are a way to externalize the inner demons and pulling these paintings, she pulls on her father, about the company, to get free.

As she says \Destroy is to affirm that we are against all odds. They explore the artistic representations of the role of women and creates life-size dolls. These women are gradually taking consistency and become chicks. A series is on permanent display at the spot where the flea market is settled Hanover (Germany).

His collaboration with jeans tinguely. He himself recently divorced his wife Eva Aeppli. Their artistic collaboration will include the cyclop. The fountain of castle-Chinon (city). And the garden of tarot cards.

From June to September 1966, it performs with the help of tinguely jeans, Hon / her, a monumental woman of 28 m long and 6 m in height and 9 m in width, lying on her back with her legs spread to moderna museet stockholm. Visitors can enter the sculpture by gender.

It opened its doors in 1998. These sculptures are living it will live with his family for several years. After the restoration of the cave is located northwest of the large garden Herrenhäuser of Hanover.

On the occasion of Expo 2000. Niki turns inside this building into a true work of art. This work began in 2001 and ended in 2003, faithful to his plans. It consists of three rooms decorated with mosaics: the left wing is covered with white mirrors, the right wing of pieces of dark blue and black glasses, and the centerpiece - by which we enter - is adorned with pebbles band of all shades, mirrors, sometimes white and sometimes golden and red glass, yellow and orange. All mosaics are covered with plastic figures about human life. Ornaments shaped spirals of the building entrance represent spirituality. The room white mirrors on the theme day life and shows with more than 40 figures highlight examples of almost all periods of the artist. The blue wing night and the cosmos. The windows and doors of the cave are encrusted grills as mirrors and glass. The item \The seller is \This article can be shipped worldwide.
bernardhandsignedpauljononeernstlithographeditionabstractionpencilprintposterhandsignedincludedlithographyjeanstonehenricrayonjeansbuffetnumberedsurrealismbanksylithoartistrareoriginalabstractveryparissignartsobeyframe