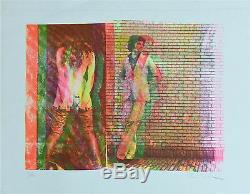 More from this artist available. For more information contact us as 06 81 01 49 19. This work is visible by appointment. Montfort Gallery 5, rue de Provence 75009 Paris. Domenico Mimmo rotella is a visual artist.

And died on 8 January. The son of a milliner, Mimmo rotella left for Naples.

At the end of his college years and began studying art. In 1941, after having found a job at the Ministry of Posts and Telecommunications, but was soon called up and integrates school students nocera officers and school NCOs of Caserta.

He graduated in 1944 and graduated from art school in Naples. Between 1944 and 1945 he taught drawing at the Institute of Surveyors Catanzaro. In 1945, he returned to Rome and began a career as a painter. After figurative beginnings, he developed a pictorial expression of neo-geometrical fashion origin.

He exhibited in 1947 at the exhibition of figurative arts union and participates in all the annual exhibitions of the art club until 1951, both in Rome to Turin. He gets his first solo exhibition in 1951 at the Chiurazzi gallery in Rome: he presented abstract and geometric works, which are little appreciated by critics. In 1949, looking for a mode of alternative expression, he invented a poem he called \compositions in the manifesto, edited by leonardo Sinisgalli, in its issue \He engages in a performance of phonetic poetry at the University of Harvard. And other records to the Library of Congress.

It also presents its second solo exhibition at the gallery rockhill nelson. During his stay, he met artists like Robert rauschenberg. Later, he met in Rome in 1960 willem kooning.

Returning to Rome in 1953, he went through a long period of crisis, during which he stopped painting, convinced that art, everything has already been done. He comes out with what he calls a \He begins to stick on canvas pieces of torn posters and exhibited for the first time his torn posters in 1955, on the occasion of \His work uses the \With the Cinecittà series (1958), he worked on the film posters that it isolates faces and silhouettes.

His work is recognized and rewarded in 1956 by Graziano prices, and in 1957 the price Battistoni and public education. Criticism landmark work of \Leading a bohemian life, he became known also by its extravagances.

In 1962 he lectured at the New York School of Visual Arts. And in 1964 he was invited to the Venice Biennale. Friend of the art critic Pierre Restany. Since it had come to visit him in Rome in 1958, he joined the movement of the new realism. In 1960, although he has not officially signed the manifesto. In 1961, he participated in the exhibition \Where he developed a mass production process by projecting a negative image of the emulsified canvas, he calls out report or guy-art. Using typographical products, it performs between 1967 and 1973, the art-typo, tests freely reproduced on canvas. With this method it likes to overlap and entangle the advertising images.

\In 1975, he imagines the preforms, pieces of torn posters pasted onto three-dimensional substrates of polyurethane. Another experiment, during the same period, is to offend posters and enclosed in plexiglass cubes. In 1972, he published an audacious autobiography Autorotella. In 1975, he released the first Italian disk phonetic poems, presented by Alfredo Todisco. Rotella moved back to Milan in 1980.

In the 1980s, he developed the blanks or covers posters from billboards erased or covered with white sheets. In 1984, he resumed his brushes and acrylic colors to achieve a second cinema dedicated cycle works: Cinecittà 2.

In 1986, he exhibited in Cuba at the University of Havana and realizes that occasion a performance laceration posters on the city square. During the same year, he lectured at the Domus Academy in Milan. It performs on-paintings (sovrapitture) in pictorially intervening on torn advertising posters and pasted on canvas and metal support, on which traces of the signs that remind graffiti. In 1997, he directed the Felliniana cycle, in tribute to the filmmaker federico fellini. In 1990 rotella participates in the georges-pompidou center. In Paris, the exhibition \New york in the exhibition \In 1991 he married a young Russian economist, Inna agarounova, he has a daughter, asya. He is an Officer of Arts and Letters in France. He was invited to the Guggenheim museum. New york in 1994 for \De los Angeles on the occasion of the exhibition \In 1996, the inauguration of one of his exhibitions is broadcast online.

In 1999, the mayor of his hometown, sergio abramo takes a bylaw authorizing it to freely tear down posters in the territory of Catanzaro. The item \The seller is \This article can be shipped worldwide.