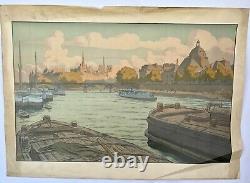 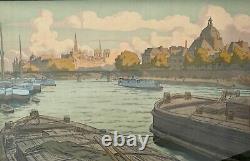 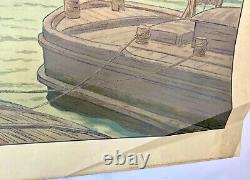 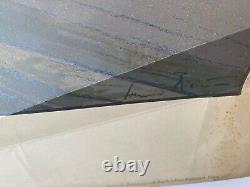 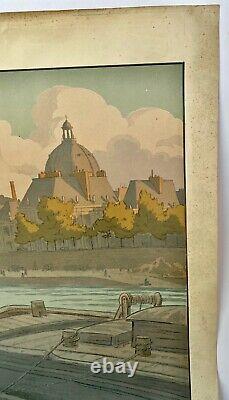 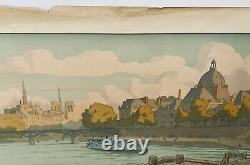 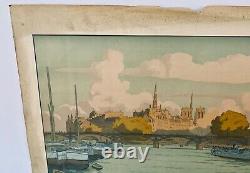 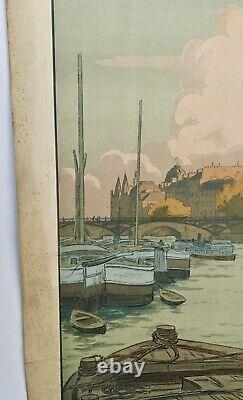 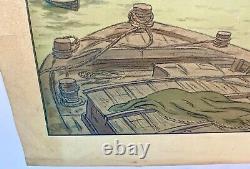 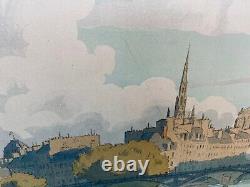 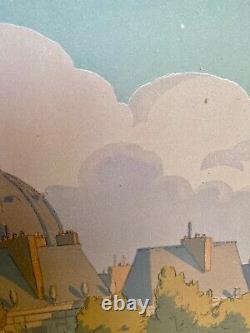 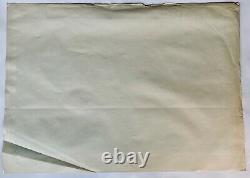 Lithography henri riviere l'institut et la citrie serie les paysages parisiennes m238. Board n°4(out of 8) of the series Parisian landscapes. Lithography in 12 colours edited by eugene vergneau. Test on ivory-coloured glazed vellum. Note that the litho has multiple small tears on the top, a larger tear on the left side, on the bottom a large fold and small tears, foxing points in the margins as well as spots. You will notice that the corners are horny, whether there are small black or white dots on the seine and in the clouds, a larger white dot in the sky to the left. We took as many photos of the defects as possible so that you could judge the condition.

Henri Rivière (born 1864 in Paris) is a French painter, engraver and illustrator. He began his career with drawing (strongly inspired by the works of golden gustave) and then with the engraving in soft size and specifically the water-strong in 1882. At the same time he began a career as a director and scenographer, in 1886, from the shadow theatre to the cabaret of the black cat, which he improved by creating very innovative colour sets.

He assumed artistic direction until the black cat closed in 1897. He then devoted himself exclusively to painting and engraving and established himself in the history of strong water, print, wood engraving, lithography and watercolour. Henri river was born in 1864 in Paris. His father is a mercer and native to ax-les-thermes. The young river was formed in 1880 in pictorial art at the painter of history Emile bin, and then gave illustrations to various newspapers?

In 1891 valloton also renewed the wood engraving, with Gauguin or Émile bernard and Toulouse-lautrec in turn revolutionized the art of the poster, drawing the one intended for the famous cabaret opened in 1889, entitled Moulin-Rouge - la Goulue, which would follow the one made in 1894 by alfons mucha for sarah bernhardt in the role of gismonda. He married eugénie ley in 1895 and lived at the no 29 boulevard de clichy à paris. The couple built a house in loguivy-de-la-mer (ploubazlanec, at the mouth of the trieux), and this is where the summers are now until 1913. In 1912, on the death of his brother jules, he took care of his nephew George-henri river, the future museologist.

In 1917, henri river ceased to express itself by print, and he used watercolour, already a little practiced since 1890 (he painted about a thousand watercolours). He travels a lot, spends the Second World War in the baronies where his wife dies in 1943, becomes blind in 1944, and dictates his memoirs, published in 2004 under the title of the detours of the path.

For the state thank you for detailing the photos. Do not hesitate to zoom in. The photos are an integral part of the description. I remain at your disposal for any questions. The best ally of mail order sales remains the dialogue, for any questions during a sale but also for any questions during your purchases. I will answer all your questions, do not hesitate. Don't forget to add me to your list of favorites. As you can see in our evaluations, we take the utmost care in the manufacture of our very conscientious packaging packages with several layers of protection: bubbles, cartons....... Shipping costs include shipping costs and packaging allowing us to guarantee you the safety of the object until reception. The item "lithography henri riviere l'institut et la cinéma serie landscapes parisiennes m238" has been on sale since Wednesday 12 May 2021.