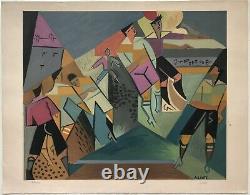 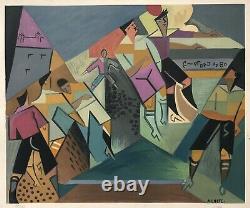 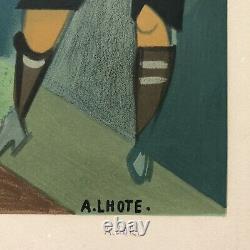 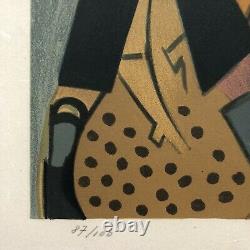 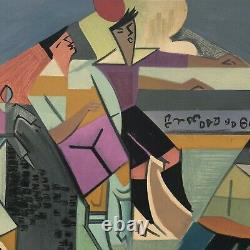 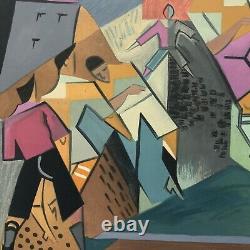 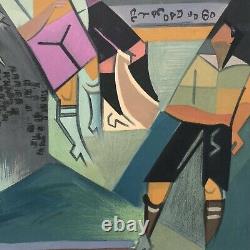 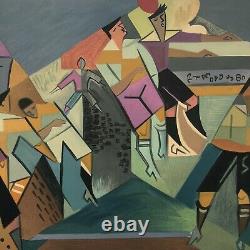 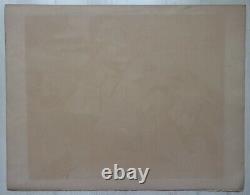 Signed with datelier stamp at the bottom right. Numbered \"87/100\" in pencil at the bottom left. Dimensions: 51 x 65 cm. Note: the lithograph will be sent rolled in a cardboard tube. André lhote, born in Bordeaux on July 5, 1885 and died in Paris on January 25, 1962, is a French painter, engraver, illustrator, art theorist and teacher.

He is one of the representatives of the Cubist movement. In Bordeaux, André lhote, the son of a city employee and an embroiderer, spent ten years in an apprenticeship with a sculptor decorator and took courses in decorative sculpture at the School of Fine Arts in Bordeaux until 1904. It is by reading the diderot salons, the delacroix diary and the aesthetic curiosities of baudelaire that he comes to painting. He moved to Paris in 1907. The gallery Eugene druet organized its first exhibition in 1910.

He was associated with the Cubist movement in 1912, with his French landscape canvas, however he rejected what was too abstract in this form of painting and he always sought to maintain a link with classical painting, whether by subjects or by the rigour of his compositions. He wants to enshrine modernity, not in rupture, but in the continuity of tradition.

Three of his works were exhibited at the independents' fair in 1913. He was reformed because of a disease of the retina and therefore did not participate in the war.

Assigned to the prefecture of the roundabout he shares the office of georges de sonneville with whom he collaborates. In 1919, thanks to Jacques rivière that he knew, he kept a column of art criticism in the new French magazine. From 1918, he taught in various academies until the founding, in 1922, of his own academy at No.

18 rue d'odessa, in the Montparnasse district. He taught there for the rest of his life.

It brings together texts by great masters, among them Leonardo da vinci, under the title of the palette in the writing board. Most of his teaching lies in his two treatises: the treaty of the landscape and the treatment of the figure. Lhote also organises summer internships for his students in the house he bought in 1926 in mirmande in the drôme. From 1940 and throughout the occupation, many artists found refuge there, such as Alexandre garbell, palué stone, marcelle rivier and guy marandet who would remain there. In 1936, he was a member of the editor of the Communist newspaper that evening, for which he was in charge of art. In 1938, he discovered Gordes where he bought a louis xiii-style house that he renovated. He lived there, alternating with mirmande, from 1939 to 1942. He introduced his friends to the appeal of the village. Marc chagall, attic jeans, willy ronis and others become his neighbors. From the very beginning, Lhote has felt very much in tune with the motto of the \"all decorative\" art deco. It will keep until the end this taste for decoration. In 1957, he painted murals for the Faculty of Bordeaux Medicine. The item \"lhote andré lithography original signed numbered Cubism rugby sports match\" has been on sale since Sunday, November 8, 2020. It is in the category \"art, antiques-art of the 20th, contemporary prints, engravings\".

The seller is \"batou91\" and is located in bets. This item can be delivered anywhere in the world.