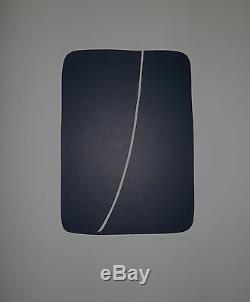 Lithography 1976 signed lower right. Circulation 110 ex size 57 x 47 cm. Hans hartung, born and died on 21. One of the greatest exponents of abstract art. And the father of tachism.

Its mission is early: he said that from the age of 6 years. \I had to have completed their plot zigzags on the page before the outbreak of thunder.

\From 1912 to 1914 his family moved to Basel. Astronomy he built his own telescope through which he observes. Whose abstract appearance anticipates his future works and photography to amaze.

After the death of his father and against the rise of Nazism. Hartung leaves Germany for the Balearics. Confident the passage in Paris a few paintings to the gallery Jeanne Bucher; he built a small house on the north coast of Minorca. Without money, he returned to Paris in 1934, then returned through Stockholm in Germany, in Berlin.

His first works consist of black ink paths vortices eyes closed, to appease anguish. Facing great financial difficulties, illness of his wife, the divorce, the withdrawal of his passport by the embassy of Germany, hartung enjoys the hospitality of Goetz and worked in the studio of sculptor julio gonzález. In 1939, he enrolled on the list of volunteers against Hitler in war and wife Roberta gonzalez, the daughter of the sculptor. Mobilized in December, he was assigned to the Foreign Legion.

And sent to Indochina and then in North Africa. Demobilized, he took refuge with the gonzalez family in the lot. After the death of Julio gonzalez in 1942 and the occupation of the whole of France, hartung pass in 1943 in Spain.

In November 1944, he amputated his right leg in dijon. The Military Medal and the Legion of Honor.

In the following years, hartung participated in several exhibitions (first solo exhibition in Paris in 1947 at the gallery conti lydia revealed to the public) and was noticed by critics. Performs on it a film that was presented in 1948 in Germany and 1950 in Paris.

In 1949, he made several solo and group shows and met schneider. It is then recognized as one of the leaders of informal art. And one of the precursors of action painting.

A retrospective of his work was presented in 1952 at the Basel Museum. Where he met Anna-Eva Bergman. In 1953, Hans hartung settles again with Anna-Eva Bergman, returned to Norway, and divorce from Roberta Gonzalez. He began to exhibit in France gallery. And was elected in 1956 member of the Academy of Arts in Berlin.

He received in 1960 the great international painting prize of the Venice Biennale. From 1961, the scraping process is causing a renewal of his painting. He also invented many broad brush tools, guns and airbrushes, broom brushes, solfate, watering hoses, roll printers ...

And uses new materials (vinyl and acrylic paint that dries quickly). On the occasion of the publication of the catalog of his prints, they are exposed to in their entirety brunswick.

Large retrospective of his work is presented in Turin museum. In 1966, the national museum of modern art. In Paris in 1968, then in Houston.

In 1969, while his recent paintings are exhibited in New York. Hans hartung awarded the honor of the biennial burning Ljubljana. In 1967, the Grand Prize of the Arts of the city of Paris in 1970.

For his seventieth birthday, cologne museum. He devotes a new retrospective in 1974 and the review chair rail a special issue. In 1968 hartung built near Antibes. A house he designs the plans and where he stayed permanently in 1972.

Other retrospectives are devoted to him in 1975 in Berlin. The Metropolitan Museum of Art.

New york exposing thirty of his monumental works. The editions skira publish an ignored world seen by hans hartung, with reproductions of his photographs and texts by Jean Tardieu. Hartung was elected in 1977 at the Academy of Fine Arts of the Institute of France. Organizes a traveling exhibition of his etchings and lithographs.

Hartung was in 1981 the first artist to receive the award Kokoschka created by the Austrian government. The same year, the Städtische Kunsthalle Düsseldorf in. Then the Staatsgalerie moderner kunst munich. Organize a retrospective exhibition and the Henie Onstad-founded in Norway. Hartung sees dedicate in 1982 a permanent personal room to statsgalerie moderner kunst munich.

The Regional Council of Provence-Alpes-Azur coast inaugurated in 1983 at the Antibes museum. An exhibition of his photographs while kupferstich-Kabinett der Staatliche Kunstsammlungen Dresden. Exposes 61 lithographs and etchings he offered. In 1984 is open to hessisches landesmuseurn Darmstadt.

A room devoted to his paintings, and hartung receives the Grand Cross of the Order of Merit of the Federal Republic of Germany. In the last years of his life hartung will paint spray paint, this allowed him to over 300 paintings in the year of his death in 1989.

Anna-Eva Bergman died July 24, 1987, hans hartung December 7, 1989 to antibes. According to his will his ashes were scattered in the Mediterranean.

\\The item \The seller is \This article can be shipped worldwide.
originalabstractincludedpaulposterbuffeternstlithographsignedartslithographyrarecrayoneditionhandsignedjeansveryartisthenrijononepencilnumberedsurrealismobeysignprintbernardhandjeanabstractionlithostonebanksyframeparis