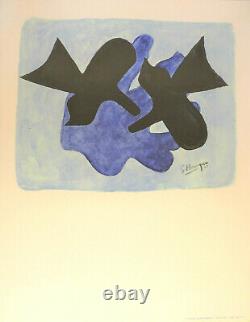 Color lithograph on paper banks for collectors. Signed in the lower right plate.

Signed in the plate on lower rigth. Subject: 13.4 \Georges Braque was born in Argenteuil (Seine-et-Oise, currently val-d'oise) May 13, 1882 and died in Paris August 31, 1963, is a painter-artist and a French sculptor.

It is with Pablo Picasso, one of the initiators of Cubism. Painter of animated compositions, figures, interiors, still lifes, landscapes, collage painter, engraver, sculptor.

Georges Braque: \He spent his youth in the harbor and studied at the School of Fine Arts from 1897 to 1899 led by Charles lhuillier. He attended a master decorator and received his craft certificate in 1901. The following year he entered the academy he attends Humbert until 1904. There he met marry laurencin and francis picabia. The Congolese art in particular influenced his work.

He painted his first works under the influence of Impressionism until he discovers in 1905 dautomne living canvases of Matisse and Derain Henri André. Then begins an artistic collaboration with Othon Friesz with whom he made a trip to Antwerp, then the following year in Estaque (oeuvres du Rhone) where he brought wild paintings of pure colors and geometric compositions. His paintings are exhibited in March 1906 independent living. In 1907, it is marked by the exhibition of paintings of Paul Cézanne in dautomne lounge. He begins to develop a new system of representation based on the simplification and geometric shapes and the flattening of perspective.

Then he met Pablo Picasso who then painted ladies of Avignon. This is a revelation to him. Consistent with these influences and his interest in art primitive, his pictorial orientation is completely upset. Then he painted, from December 1907 to June 1908, the great naked in which he represents the volumes identified by wide hatched black.

During the exhibition of his paintings at the Kahnweiler Gallery, the critic Louis Vauxcelles compares his painting to a pile of small cubes. The word is said, from 1909 to 1912, Braque and Picasso develop theories of Cubism.

So there will be a proliferation of facets. The forms will then be geometrically and simplified and the colors will be predominantly gray and brown shades.

This is a figurative painting but always complex. Meanwhile, Georges Braque continues to paint landscapes influenced by Cézanne, he eventually abandoned landscapes to still lifes for which he is known (Guitar and fruit bowl in 1909). He also painted a few figures like female torso in 1911. In 1911 he saperçoit his painting moves away too much of the model. His painting tends toward labstraction and it displeases him.

To reconnect with the real, it innovates with direct introduction into his painting objects of reality. In Portuguese, he adds letters and numbers stencilled. Remembering his decorator training will be of material imitations especially in women with guitar in 1913. Georges Braque also introduced into his painting collages, either wallpapers, newspapers, daffiches. This technique is called \It is now more a question daplats paper in a frontal plane that damoncellement volumes, it is the synthetic phase of Cubism.

Also, he made a series of three paintings, birds, following an order from the Louvre. They are visible on the ceiling of the room henry ii. The First World War interrupts closely with Picasso. Braque was mobilized and must participate in the carnage.

Sent to the front he was seriously wounded in the head in 1915 and should be trepanning. He can start painting until 1917.

His style and his research will evolve once more individually but there will always be concerned about the representation of the subject as evidenced by his many studies of workshops, round tables or still lifes. It will attach great importance to the matter of its colors, freedoms shapes and rhythm of his figures.

He continued his work in the same perspective of cubism, allowing it to evolve into forms less angular and more colorful tones, a little closer to reality. He painted, more traditional way, in 1918, a series of round tables and fireplaces from 1922 to 1927. He is a sort of \. By 1930, he runs several series: bathing, beaches, cliffs. Then jusquen 1938 he painted decorative still lifes like pink tablecloth (1933) and the yellow tablecloth (1935).

War is synonymous for Georges Braque austerity and despondency. He turns more towards the objects of everyday life of the period of occupation, the wine or the bread, fish. In 1942 its production becomes even more fruitful, he completed the stove, several small tables and compositions reintroducing the human figure or decorative patience [within the range]. In 1945, reached dune serious illness, it must sarrêter painting for several months. From 1949 to 1956, he composed the workshops, eight paintings toned \These are the fruits of research, developments and memories of the painter.

These works are the culmination of many years of \Already appears in this work, the theme of the bird to the highly schematic form. The expansion of its flight, its freedom, its games with gravity and space, its migration seeming limitless, made a dream symbol of peace and escape.

For him, this is also a message to his friend laurens, deceased. The paint still shines for this absolute space and will continue his research far from fashions and Parisian salons. He also produced many decorative works such as sculpture of the door of the church's tabernacle assy in 1948 or from 1952 to 1953, the ceiling decoration of the Etruscan hall louvre on the theme of 'bird. He became the first artist exhibited at the Louvre in his lifetime.

He is credited as the creation of the seven windows of the chapel Saint-Dominique and the one representing a Tree of Jesse in the parish church of Saint-Valery-sur-mer varengeville in 1954. For his human qualities, wisdom and character his very engaging personality, he will be one of the most significant painters for new generations (especially Nicolas de Stael). Recognized internationally as one of the major painters of the twentieth century, he died August 31, 1963 in Paris.

He is buried in the marine cemetery varengeville-on-Sea. The item \prints \The seller is \This article can be shipped worldwide.
buffetjononehartunghandartsabstracthansoriginalpaulhenrijeaneditionc215crayonjeansstoneverysignedbernardposterinvaderlithographyparisabstractionhandsignedlithographpencilbanksynumberedrarelithojoanobeyprintwoman