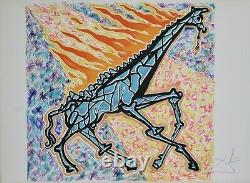 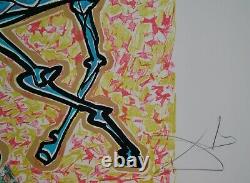 The giraffe on fire (1974). Lithography on vellum paper arches. Special features of the work.

Print signed at the bottom right by the artist. This lithography was printed in 580 copies, of which 250 were numbered. Certified, Grapholit workshop of the master printer claude jobin. The invoice is valid as a certificate of authenticity and assumes responsibility for the gallery.

From the series the stained glass and. In this series of the human jungle theme which is composed of 6 lithographs. The titles of these lithographs are: la. On fire - the elephant with stork legs - the swallow - the rider - the fish - the virgin and rhinoceros. In this series the Dalinian symbolism invites us to the introspection and understanding of the psychic forces of the unconscious.

Dali realized this lithography because it symbolizes the conflict that existed on his native Spanish land as well as the one that could survive in himself. The fiery giraffe symbolizes the duality of the human being. Albert field "the official catalogue of graphic works of salvador dali" ref 76-2-a - page 179 michel lopsinger "catalogue raisonné des estampes ii" page 159. Salvador dali is a Spanish painter born in Figueras in 1904 and died in the same city in 1989.

Dali is considered one of the main representatives of surrealism and one of the most famous painters of xx. Influenced very young by impressionism, he left figueras to receive an academic artistic education in madrid where he became friends with federico garcía Lorca and luis buñuel. He sought his style by drawing on different artistic movements.

On the advice of joan miró, he joined at the end of his studies and joined the group of surrealists. He found his own style from 1929, when he became surrealist in his own right and invented the paranoid-critical method. Excluded from this group a few years later, he lived the war of Spain in exile in Europe before leaving the france en guerre for new york. On his return to Catalonia in 1949, he made a turn towards Catholicism, hence his keen interest in works such as the divine comedy on sale in this gallery.

The expert's commentary and biography have been developed by us as a result of our expertise and the various reference books on the artist in our possession, therefore any copy or reprint is prohibited. This work will be sent within 2 working days, properly packed in a solid and secure package at the ends by guarantee adhesive strips. In the event of return, the buyer shall be responsible for the same shipment and packing conditions. For further information, please contact us.

06 20 26 92 55. This item is in the category "art, antiques\art of xxe, contemporary\prints, engravings". The seller is "wdartgallery" and is located in this country: fr.

This item can be shipped to the following country: whole world.