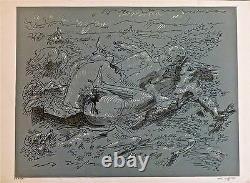 This work can be seen by appointment at the Montfort gallery 64-66 chubby passage 75009 bets. André masson, painter and engraver, was born in balagny in a village in lile de France. In 1904, he settled in Brussels where he took courses in the academy of fine arts.

André masson left this city to live in Paris in 1912. There he is accepted in paul baudoin's lalier of the National High School of Fine Arts. When war breaks out, masson is entangled.

Seriously wounded, he had to stay for several months in a military hospital in 1917. Masson returned to Paris in 1922. His art was influenced first by André derain and by Cubism. Soon after, he came into contact with the Surrealists and joined their movement in 1924.

The first exhibition of the Surrealists, in which Masson also participates, took place in the stone gallery in 1925. Masson left the group five years later in a protest against the authoritarian outburst of Breton, who wanted to take over the leadership. Thanks to surrealism, Masson is made aware of the access to the rational and the psychological sources of art. It seeks to analyze their deep character using automatic writing from the insensurent. Using this method as a starting point, a method to which he is now more or less faithful, Masson develops the famous sand paintings composed with glue and sand of different colors.

The free delineation of forms and the concentration of the lines of his graphic works bear witness to the study of the calligraphy of eastern lasy. Masson often retains his violent and terrible visions by drawing oscillating lines as under the effect of trance or by also practicing writing in a state of ecstasy and violence.

However, behind spontaneity and passionate feeling, the mighty observator can recognize most of the time an orderly Cubist structure on his paintings. From 1942, when Masson fled occupied France for the Usa, he created fragmented figures or figures of the horror.

He was so concerned about such motives until the 1960s. Masson lived again in Paris from 1945. It definitely breaks with surrealism.

The multi-faceted work of masson includes, among other things, illustrations of books and decorations. In 1966, he painted the ceiling of the Paris theatre of the leoon.

In his works, he has always remained close to the subject despite the fact that he is ladule and considered to be the initiator of abstract lexpressionism, especially in the Usa. Masson wants to make his own vision a reality and not photograph the event of the day.