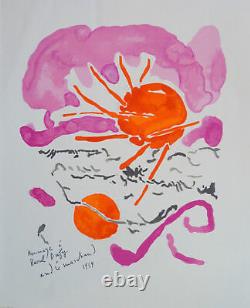 At the age of eleven, André merchant lost his mother and kept an unsery wound. He attended high school with the Jesuits daix, where his father was a mathematics teacher and began painting at the age of fourteen, taking the Holy Victory Mountain as a model for his first watercolours. In 1926, André merchant broke up with his father and then came to Paris where he knew no one. To earn a living, he works as a labourer in a construction company. During four difficult years, he did not attend the fine arts school but tirelessly visited the louvre.

He found the Aixois darius milhaud and, moreover, became bound to francis gruber and stone tal coat. In 1932 he began exhibiting at the autumn fair, then at the independents' fair, and gravitated around the \"new forces\" group. After a trip to Algeria, in 1933, in biskra, at the gates of the desert, which made a strong impression on him, he worked a few years on the shores of the Mediterranean, in toulon, hyères and then Saint-Rémy-de-Provence. On the way to the popular front, the Signac painter lenvoie at the \"Congress of Communist Intellectuals\" held in Moscow to represent the young French painting. He then composed the sets and costumes of the \"Provençal Suite\", a ballet of darius milhaud, and of \"mireille\" for rouché in the comic opera.

In 1937, André merchant received, for the girl and the paralytic, the paul guillaume prize, intended to distinguish the talent of a young painter. This canvas is part of a series of monochrome works in which hieratic characters, unrelated to each other, are arranged in front of quasi-desert landscapes, in an atmosphere close to the metaphysical painting of chirico. Marchand worked in 1939 in the Pyrenees when he was mobilized and assigned champagne to the headquarters of the gamelin general. He then had to cross France on foot in June 1940 and, shot by fighter bombers, narrowly escaped death. When he raises his head, he is dazzled at the sight of a field of poppies.

But the color nenvahit his palette only little by little. Demobilized and folded in aix-en-Provence, it compensates, for example, the bright red of a sky by the presence of three large black parques. Braque congratulated the merchant: \"You have a sense of black light.

\" André marchand participates, with beaudin, berçot, bertholle, boron, coutaud, desnoyer, gischia, lapicque, lasne, lucien lautrec, legueult, moal, manessier, gable, suzanne roger, singier, tal coat and charles walch at the exhibition twenty young painters of French tradition organized in 1941 in Paris by bazaine. Installed in Paris rue campagne première, in 1943 he was one of the founders of the May show, which first opened in 1945 and will participate for twenty years. In 1942 louis square exhibited merchant andré who stayed in saulieu during the winter of 1943, making his first snows, and worked in the forest of Fontainebleau. Aimé maeght offered him a workshop in 1944 in vence and then in the old canes, commissioned him fifty lithographs for black Provence and in 1946 offered him the chance to be the first artist to open his gallery on the rue de Téhéran, a risky bet because merchant is still unknown to the general public, but won: his arlesians were very successful and the merchant exhibitions followed one another around the world.

Immediately, loved maeght offers him to do a second exhibition the following year. But the Parisian public, who had been considered a painter of Provence in the relentless sun, seems disoriented in front of the new canvases that appear a complex vegetal world where light can only sinfilter. In 1946, the artist was attached in Burgundy to the heart of the abundant vegetation of a primary forest.

The exhibition is a failure. Shaken by this disavowal, merchant seeks to recharge his native land in Provence. Jacques Latour, the curator of the museum réattu darles, offered to set up his studio there. From 1949 merchant found most of his motifs in camargue where he constantly observed bulls and flights of Flemish. In 1950 he painted in Tuscany and Umbrian and then embarked on the series of his silent still life lives. While retrospective exhibitions of his work are presented in the Netherlands and Belgium, his paintings are an international success. Their rating is equivalent to those of dufy and chagall. It is therefore difficult to understand under what circumstances a world-famous artist was then able to disappear from the media scene.

Is Merchant a victim of his bad temper? Indeed, he is so demanding for the setting up of his exhibitions that some gallery owners find him infrequent. He himself avoids contact with his admirers so as not to waste his time, which he devotes entirely to his pictorial research.

He also refused to be a professor of fine arts, to be a member of the institute and to receive the legion of honour. To compensate for this isolation, his relatives maintain a network of collectors of his paintings throughout the world, which prevents him from the test of new exhibitions but increasingly away from the public and the media. This solitary life led him in 1963 to embark on a semi-abstract painting to render, for example, the assaults of the mistral on the city darles. A trip to Mexico and Guatemala in 1967 allowed him to rediscover his taste for structured compositions in bright colors. To render all the variety of lights he found in 1957 in beautiful island-in-sea, merchant, after a series of paintings made between 1959 and 1963, uses from 1964 to 1972 the lackey of which he is considered a master.

Similarly, in his marine breaths he managed to render the complex movements of the locusan. Was Merchant the victim of a clean love injury? He was considering establishing his foundation at the reattu museum where he had worked. Upon learning of this project, Picasso offered this museum 56 drawings, which made it impossible to install the foundation. And yet, André merchant had also revealed himself to be an exceptional draughtsman whom Matisse admired.

At the age of 90, a few months before his death, he displayed an astonishing vitality that, every morning, made it necessary to ensure the shape of his hand by reproducing the swirls of the Rhone. André Marchand said: \"A painter always makes the same painting and on the day of his death, he felt that it did not even begin.\" The item \"André merchant (1907-97) lithograph 1959 tribute to raoul dufy school of betting\" is on sale since Thursday, March 27, 2014. It is in the category \"art, antiques-art of the 20th, contemporary prints, engravings\".

The seller is \"www.Galerie-d.Art\" and is located in bets. This item can be shipped to the following countries: America, Europe, Asia, Australia.