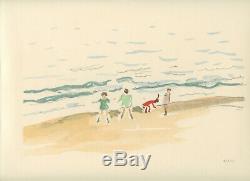 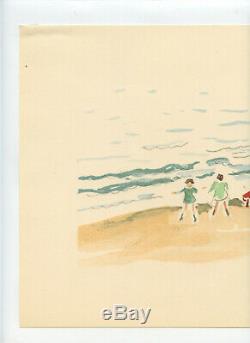 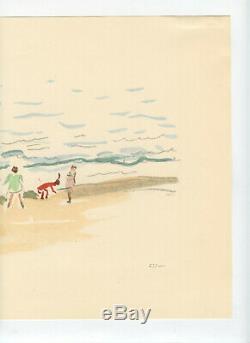 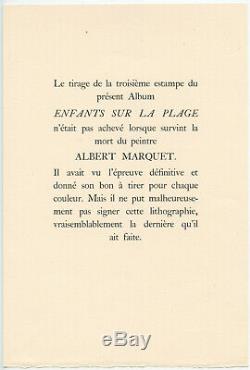 Children on the beach, 1947. Last lithography albert marquet produced in 1947, the year of his death. The painter has unfortunately not had time to sign his death intervening 14 June 1947. The plaque explaining the circumstances (see last photo) will be attached to lithography.

Replacing free hand paris possible appointment. The piece is sold with an invoice with a detailed description. Last lithograph of albert marquet Produced in 1947, the Year de son death. The painter Unfortunately Did not-have time to sign it, His death intervening june 14, 1947. Very Rare original lithograph, not signed, hand-numbered (/ 100) in pencil.

The meeting with marcelle swift and Algeria. Born into a modest family. His father is employed railways, albert marquet is encouraged by his mother to practice painting and drawing, to compensate for his physical, a. That the gene for walking. Myopic, Albert is a quiet and reserved. In 1890, his mother took a commercial cinema in Paris, so he can take art classes. He joined at age 15 at. The school of decorative arts. Six years his senior, who takes under his protection \In 1894, they come with. Marquet begins academically drawing nudes. In 1898 he attended with Matisse. Manguin settles in a workshop in. District it shares with inlaid and his comrades. In 1899, the first successful albert marquet was admitted to the lounge.

National Society of Fine Arts. In Paris, Grenoble and salon. To live marquet and Matisse, painted decorations of theater, as well as decorations and friezes for the Universal Exhibition. In 1901, Albert marquet participates in. And in 1902, the weill bertha gallery opens its doors for a group exhibition.

He rents an attic room. 25 Quai de la Tournelle. He discovered the work of Claude Monet and follows his technique in producing series of paintings on the same motif at different times of the day. After a summer in Normandy with Manguin family, he participated in the first. In 1903, living which he remained faithful.

In 1904, he exhibited with the gallery druet, the state buys. In 1905, he signed with the gallery druet an exclusive contract finally assuring him a stable income. Visit Manguin in Provence with camoin. The same year, in 1905, for the first time. A place in the grand palace where Ingres, Manet, Renoir, enjoy a retrospective. Hungry Lion throws itself on the antelope, with his Matisse. Woman with hat, laprade, camoin, vlaminck, Derain, Manguin and inlaid in which critics see only daubers \Refuse to usher the lounge.

In 1906, on the advice of camoin, inlaid and painted dufy leave the harbor, the life of a harbor, water, reflections. Marquet prefers the range of gray. An article in the illustration of the November 4, 1905 devoted to cats. A view from inside the exhibition of the Armory Show, New York, 1913.

In 1906, he rented a room. He likes to paint sweeping views from its quiet window, without passing pop or distracted. His father died, followed by his mother in 1907. He visited Normandy with dufy, exhibits and forges links with the circle of modern art.

In June 1909 he was in Naples and in Sicily. In September, he lived in Marseille, Tangier and Seville. From his apartment in 1910, he painted the flooding of the Seine.

That year he met the Russian collectors Morozov and. George Besson becomes one of his critics and defenders. In 1911, after a stay in Normandy, he went to. From there he wrote to Matisse.

\The following years repeat the same trips. In 1913, his works are at the Armory show.

Albert marquet is mobilized and reformed. And the sculptor Manolo to. With Matisse and following the recommendation. They send packages to friends on the front.

In 1916, after the death of his dealer. Marquet has renewed contracts with druet gallery as well as the young-bernheim gallery, contracts that run until 1931.

And inlaid invited to visit him. In 1920, he is still recovering from the Spanish flu when his friend and doctor.

He advises to go for. A view of Algiers in 1921. On the occasion of his visit to Algeria, he met a young writer marcelle swift (under the name of marcelle marty and marcelle marquet) native of Algiers, which serves as a guide. Marquet shy, confides in her, through a long correspondence. Intelligent, cultured, marcelle becomes his confidante and February 10, 1923, his wife in Algiers.

This glad marquet friends who did not appreciate the \With marcelle, he discovered the oases of southern Algeria, the. Marcelle becomes his secretary and supports his correspondence. Together they published in 1925 the book of marcelle marty.

Moussa, the small black, illustrated with 23 drawings and watercolors of a. From that date, albert marquet happening every winter in Algiers. Traveling the rest of the year, norway, italy, metropolitan France making him a perpetual traveler, whose painting is the travel diary and is recognized through numerous exhibitions worldwide cairo, chicago stockholm. He painted ports, that landscape has almost crossed without any character. In 1931, he bought an apartment.

The ceramist Josep llorens i artigas taught ceramics. Albert marquet was linked to several writers, including the poet. In 1933 he made a cruise.

Up to the Black Sea. In 1934 he made a long journey in the USSR where the painter is surrounded and celebrated. The summer of 1935 sees the return of the. Hence his family originated: it settles in. In 1937, he traveled to.

Along the Seine where is buried albert marquet. The druet gallery goes bankrupt, the dispersed stock. Marquet discovered the village of the hoop-sur-Seine, rented a house near the towpath and set up his studio.

In 1938, he participated in charity work for the defense of German intellectuals hunted by. On this occasion, he met the painter. In 1940, after putting away his works, he is forced to leave the metropolitan France to Algiers, for fear of reprisals for having signed the protest petition of artists and intellectuals against Nazism.

His house was requisitioned by the Germans raided his apartment. His works are protected by louis martinet, marcelle's uncle, who with friends, hiding. Some are even assigned to. Marquet lived in Algiers for the duration of the war. He refused to participate in the exhibition of tile that requires a certificate of \In 1942, he organized in Algiers a sale for the national resistance.

In 1943, General de Gaulle receives a gift of his paintings. Official Painter of the Navy. Only honor he ever accepted. In 1946, he returned to Paris. David Weill asked him to go to the Academy of Fine Arts, in response marquet not only refuses but demand the dissolution of the Academy and School of Fine Arts. He refused the Legion of Honor also. He participates in charity sales for Jewish children (work of protecting Jewish children) and for prisoners of war. He takes his card to the Communist Party. Surgery for prostate cancer, albert marquet goes off January 14, 1947, after having painted views of Paris.

His body rests in the cemetery of. In 1947 she published under the name of marcelle marty. Images of a small Arab town accompanied original engravings albert marquet.

Children's books, she became the historian of her husband, and publishes biographies, catalogs and many travel books, among them. Life and portrait marquet by marcelle marquet.

In 2008, an exhibition entitled. National Museum of the Marine. From March to August 2016. Museum of Modern Art of the City of Paris. The characters present at the beginning of his career tend to disappear, leaving appear that the overall effect of landscapes, ports or maritime architectures in.

It has retained its period. The sense of color and light. The illuminated streets at night, paris under snow or under a blazing sun. His art is polite, gentle and measured, without violence or pathos or expressionism and color space without excess in reserve on the wall of an interior. It creates a series of studies of variations of light depending on the season, time of day, and time. Thus, between 1905 and 1906 he painted a series of urban landscapes themed. He sees from the window of his studio at number 25, bought by his parents.

He participated in 1905 in the exhibition of \Which caused a scandal by a sudden vision of forms and colors. He later abandoned this way to research a tonal harmony, favoring harmonious colors, less saturated to make the nuances of light. Water is one of his favorite grounds, including the representation of. And platforms, like North Africa ports: Algiers, candle, Oran, Tunis, La Goulette.

Separation yvonne and marriage with marcelle, seem to seal the abandonment nudes and genre scenes in favor of an art of the landscape he enjoys playing with his painter friends. In 1919, he traveled widely, especially in Tunisia and Algeria, in the company of. He also traveled the north of France, the Belgian coast and the. In the summer of 1920 marquet prompt. The onsite La Rochelle painter Gaston Balande them discover the surrounding landscapes they paint together on the ground.

He stayed among others to. And there painted landscapes of the Seine.

He painted his wife sewing (inside the band) and his friend. In the process of painting (the workshop of the hoop) at his side. In his memories, his wife wrote marcelle.

\Its well insulated in the attic studio overlooked a loop of the Seine, its river. Albert felt more comfortable and as safe. Desnoyers was working in his corner shop, it is neither hampered the one nor the other. The item \The seller is \This article can be shipped worldwide.
banksyjeansparislithographyposterlithographsignedpaulincludedbernardabstractprinteditioninvaderabstractionartsrarepencilsignhenrinumberedartistobeyhansoriginalbuffetjeanverystonehandhandsignedcrayonframelithojonone