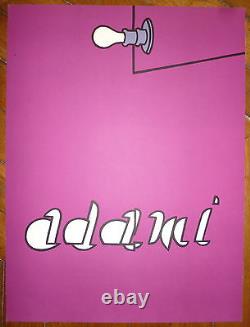 Valerio adami original lithograph unsigned, unnumbered. Format 56 x 42 cm. Valerio adami is an Italian painter. He lives and works in Paris. Half a year, the rest of the time at monaco.

Valerio adami, the most French of Italian painters, is best known for its famous flats with acidulated colours and its shapes surrounded by a black outline that suggest the clear line of the comic strip but also the stained glass windows of the churches. The main themes of his paintings are literature, travel, as well as the relations between poetry, music and painting. He also maintained close relations with writers and artists of the Parisian international avant-garde from the very beginning.

Adami forms through the felice carena workshop. And meet at venise oskar kokoschka.

After studying painting at the Academy of Brera, in Milan. In the funi achille workshop. Valerio adami gives first paintings that relate to expressionism. But, very quickly, he finds a clean style, made of shapes strongly surrounded by a thick line and treated in flats of pure colors (surrealist influence that remains underlying in his work) and without shadows. On his first betting trip.

(1955), he met wilfredo lam. He obtained his first personal exhibition in Milan. His first works, influenced by matta, were exhibited there. From that date on, he shared his life between litalia and bets while making numerous trips around the world: america from the south.

In 1968, he exhibited his work at the Jewish museum of new york, in 1970 at mexico city and jérusalem. Adami asserts as one of the notable representatives of the new figurative. It develops a psychological pictorial style characterized by the elaborate drawing, which color has the function of diverting, modifying or amplifying.

His works are singularized by the saturation of the colored surfaces where no white remains, no trace of doubt or dinomination. It defines the table as "a complex proposal, where previous visual experiments form unpredictable combinations." The figurative character of his works, carefully elaborated by many preparatory drawings, must not be delusional: it is a reconstruction of the perception aimed at the appropriation of images and not a direct reference to the reality seen "the picture is not made of the same substance as the vision". Characters, objects, landscapes are articulated into complex compositions where the classical relationships of space and depth are completely changed. But adami was often called "classic painter" because of his work on the line.

However, he never fell into "the neo-classical redundancy of postmoderns". Adami settles in betting where larc at the modern art museum of the city of betting. He devotes an exhibition to him. His work is the subject of an important retrospective at the George-Pompidou Centre.

And then exposes to such aviv and buenos areas. From 1970 to 1994, he exhibited at the gallery maeght which would become the gallery along the bet. His work on memory, individual and then collective, led him to address in the 1970s. Portraits of james joyce celebrities.

Then landscapes and historical events the French revolution. Including carefully painted title words that refer to ancient painting. The importance attached by adami to drawing, the way it brings together cultural elements, was commented by philosophers as jacques derrida. He has also carried out several studies on his evolution. He sums up his work by time: the 1960s corresponding to the enumeration of objects "that consumption size in the soul and body"; the 1970s marking a series of portraits of thinkers, writers, policies of the "modernist renaissance" and the 1980s that correspond to "memories of love, offerings to the impossible union, ex-voto to the metamorphoses of desire, monuments to separation and death".

Since the late 1980s, adami has carried out large-scale murals for various public buildings, notably in 1973. For the first national city bank in Madison. For the bar-house of the châtelet theatre. In 1985 he participated in the betting biennial.

He also created eight stained glass windows for the vitry-sur-seine city hall. And monumental paintings for the no-lost room at the Austerlitz station. Since 2004, an important retrospective has been dedicated to him at the Frisiras d'Athenes Museum, and adami has then chained several personal exhibitions in italia, Finland and Spain.

Currently, he is working on the creation of a foundation dedicated to the drawing of meina in italia. In 2008, a retrospective will be devoted to the pomodoro foundation.

And finally since 2004, he is represented by the daniel templon gallery. Finally it can be said of adami that behind his apparent coldness, one could say the elegance a little dandy of the form, adami hides anxiety, nervousness, impatience, and this is deciphered even better in his drawings, which also carry out a kind of permanent introspection of his work, as a kind of diary. Major exhibitions held in france during the period 1960-1985.

Adami, curator gaudibert stone, museum painting and sculpture. The item "adami valerio lithography original art abstract pop art" has been on sale since Friday, July 17, 2015. It is in the category "art, antiques\art of xxe, contemporary\prints, engravings". The seller is "artdac" and is located at/in bets. This item can be delivered anywhere in the world.